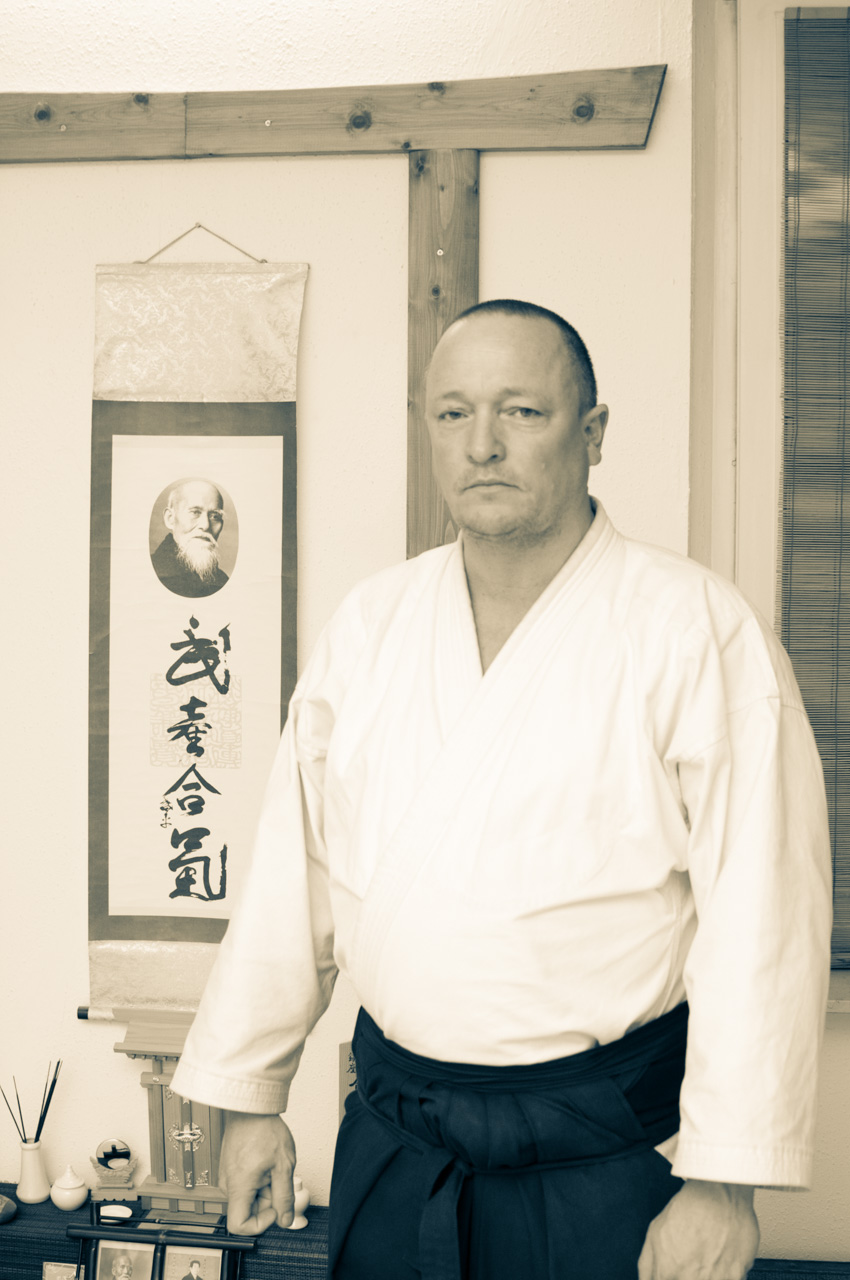 Before I start, it is a heartfelt statement to me to thank all my Deshis, Koheis, Senpais and Senseis. You fill our little beautiful dojo in the northern corner of Bavaria near the Czech border with life and get it in a wonderful way.
When I had the idea for a little open dojo a long time ago, I didn’t know it was going to develop like this. Everything lives only through you, the students and the teachers, and for that I thank you from the very heart. I often think with a smile about the small Gallic village of Alberto Uderzo and René Goscinny.
Well, what am I supposed to write about myself? I try to be really short. Since 1978 I practice Without interruption Asian martial arts / arts.

It all started with a little beating while grabbing sausages during a birthday party. And as fate would have it, I had to go on a self-defense course the next day, driven by my mother.
Thus, my journey began with a children’s course of a German interpretation of the Aikido (DAB= German Aikidobund). This was followed in 1981 by European judo and Ju-Jutsu in the German Judo Federation (DJB). But I always trained diligently and it is clearly thanks to my father that I stayed “on the tatami ( mat ) “, because without ifs and buts I was driven into Friday training, whether I wanted or not.
The training in judo was characterized by blue shins, the classic sweatbox incl. choking at the ground-Randori as well as a general mat fire. Actually, I liked the Ju-Jutsu, which was coming ever stronger at that time, because it was more in keeping with my sense of self-defense at the time.
I really wasn’t a good competitor / judoka, I always pushed myself before team competitions, although I was able to reach the third place at the Upper Franconian Championships in 1983. I think it was a real stroke of luck.

In general, however, I was always very interested in the inner arts of the Asian cultural circle, but in our area only Japanese martial arts were to be found. After I have a budo demonstration about the trad. Aikido (the Takemusu Aiki) visited, I started to practice the path of Aiki again in 1987 and turned my back on judo / JuJutsu.
To tell or write everything experienced from then on would be a novel. This was followed by many incisive experiences on my martial arts path, wonderful and also deeply formative experiences.
Countless seminars as well as a stay in Japan (1995) in the mother school of Aiki ( Iwama / Japan ) will be remembered forever. But it wasn’t just beautiful moments that influenced my path, because the ever-increasing politics in the world of Aiki often made me very thoughtful.

Through intensive general study of martial arts literature, I came across the fascinating inner art of the Chinese WingTsun Kuen in 1995; and as fate would have it, a few days later I discovered an advertising flyer in the Unicafeteria and so I started in 1995 in a Regensburg WingTsun school with this art. In November 1997 I joined the EWTO ( European WingTsun Organisation ). This fascinating inner art did not let me go from then on, the path of the inner arts opened up to me in a new, wonderful way.
But the path of martial arts demanded and demanded… . Private life paths, possible changes etc. I have always put at the side of the martial arts path, renounced many things, but I also got so much back. Some special honours during my career left me speechless and remain a lasting influence in my heart.
Often, after some time, I am asked by students who have chosen the path of martial arts what to look out for in general. The respect, the loyalty, honesty and friendship, the deferring of one’s own self and hard work ( jap. Wanginku = Work, chin. Gong Fu / Kung Fu = hard work ) , were and for me personally the well-founded character traits of a martial artist.

Just enjoy what you do. Be kind, stay humble and don’t become arrogant. Even if your teacher is strict with you, accept what is shown, be loyal, be satisfied and exercise restraint.
Keep fit as much as you can physically and mentally, pay attention to your body, because you only have one. Give yourself some peace and quiet.
It is not absolutely necessary that you go to training / Keiko seven times a week, but it is important to stay on the way, keep constancy. All that counts is that you always want to learn and practice.
Always go back to the beginning and start over. Remember, it is not graduation that is decisive, the person exercising it.
Think about what you’re doing, analyze it intensely. Walking, sitting alone in the café, on the park bench, etc.
If you start to think in the martial arts, or only feel the inner approach or feel that you can do something, then you have clearly stopped learning.
If you are really forced to draw your sword once in your life, pull it with great heart, deep courage, irrepressible will and burning passion!
After these long years of martial arts, I see everything today under the great inner way of the Do (jap.), the Dao / Tao (Chinese). Today I definitely train differently than I used to, because my body has clearly paid away duty. ( Note: We trained our Kihon – basic techniques – at the limit and went to our limits, non-stop hard fall school, Suwari Waza – ground techniques and much more). Take my remark to heart. .At the end of my remarks, I now have a clear need, as well as a deep, not to be described in words, thanks and intimate commitment to mention my teachers from past and present, for what is a student without a teacher, the person who accompanies you, shapes, builds, shapes, etc. ?

On the way of the AIKI

My first Takemusu Aikido teacher, Mr. Edmund Kern Sensei, (R.I.P / 8ter Dan Hachi – Dan Aikido / Kokusai Budoin Renmai – IMAF)
Morihiro Saito Sensei (9th Dan Aikido / Aikikai): In 1946 he began to train under his teacher, O-Sensei Morihei Ueshiba, the founder of Aikido, until his death in 1969. It was a great honour to learn from him at the birthplace of Aiki in Iwama / Japan and to participate in seminars in Europe. Saito Sensei died in 2002. Domo arigato goshaimashita, Sensei!
My Sensei, mentor and dear friend, Dr. Paolo N. Corallini Shihan, (7. Dan / Aikido / Aikikai- Takemusu Aikido) who has been teaching me for over 24 years in the sense of Aiki and always supports me. Ishin Denhsin, Sensei! Domo arigto goshaimashita!
In retrospect, I can say modestly that I had the unique honor of training among all the well-known greats of Takemusu Aiki : Mme Patricia Guerri Sensei (8. Dan / Takemusu Aiki Bukkikai / France), Daniel Toutain Sensei ( 6 Dan Aikikai / France ), UlfAs Shihan ( 7 Dan Aikikai ), Bill Witt Shihan ( 8 Dan Aikido ), Pat Hendricks Sensei ( 7 Dan Aikikai )

My absolutely unique wonderful SiFu, GM Prof. Dr. K. R. Kernspecht (10th degree MOC), who accepted me as a private student, teaches, teaches, shapes and personally promotes the art of WingTsun in recent years.
This heartfelt thanks also goes from the heart to GM Thomas Schrön ( 9th degree Moa ), GM Dr. Oliver König (9th degree MOA), GM Guiseppe Schembri (9th degree MOA) and DaiSifu Andreas Gross (8th MG) as well as my Sihing Sifu Michael Stop, where I started my WingTsun training.
Not to mention all the other masters, teachers and students of the EWTO, who I know personally and greatly appreciate. It is always a great pleasure when we meet and I have the opportunity to learn from you.

A heartfelt thanks goes to GM Sam F.S.Chin, who introduced me to the art of Zhong Xin Dao / I Liq Chuan Sam Chin Way with deep Daoist teachings over two years.

To this day I practice with great joy, full of energy and intense passion as far as my free time allows. I was able to experience and experience all facets of human beings as well as of being human within the arts. And fortunately, I can still learn in all two inner styles… .

VITA WING TSUN ( EWTO – European WingTsun Organisation )
1995
Beginning of WingTsun studies in a Regensburg WT school
1997
Admission to the EWTO ( European WingTsun Organisation ) / Schools of Upper Franconia – direct student ( Todai ) of Prof.Dr.sc.K.R.Kernspecht, the founder and head of the EWTO.
1997 – 2015
Trainer
Trainer 1 – 4 Certificates
Technician / Teacher Degree / HG 1 – 3
continuous seminar visits / further trainings within the EWTO under GM Thomas Schrön, GM Oliver König and GM Giuseppe Schembri as well as constant private lessons at my SiFu Prof.Dr.sc.K.R.Kernspecht
2016
Existence of the fourth teacher degree under my SiFU, Prof.Dr.sc.K.R.Kernspecht.
21 years active WingTsun
2017
20 years member of the EWTO / Appointment as Sifu of WingTsun at the Int.Lehrgang in Hockenheim by my SiFu Prof.Dr.sc.K.R.Kernspecht.
First personal contact with GM Sam Chin ( Zhong Xin Dao / i Liq Chuan )
2018
Further seminars and small groups at my SiFu Prof.Dr.Kernspecht iWT, Wing Tsun, intensive preparation for my 5 master degree in WingTsun Kuen.
Intensive training in the Zhong Xin Dao under GM Sam F.S.Chin and his students in Kiel, Kassel, Frankfurt, Munich, Wiesenbach and Norderstedt, preparation for the Level One exam.
2019
Successfully passed level one exam in the Zhong Xin Dao under GM Sam F.S.Chin on 17.03.2019 in Norderstedt.