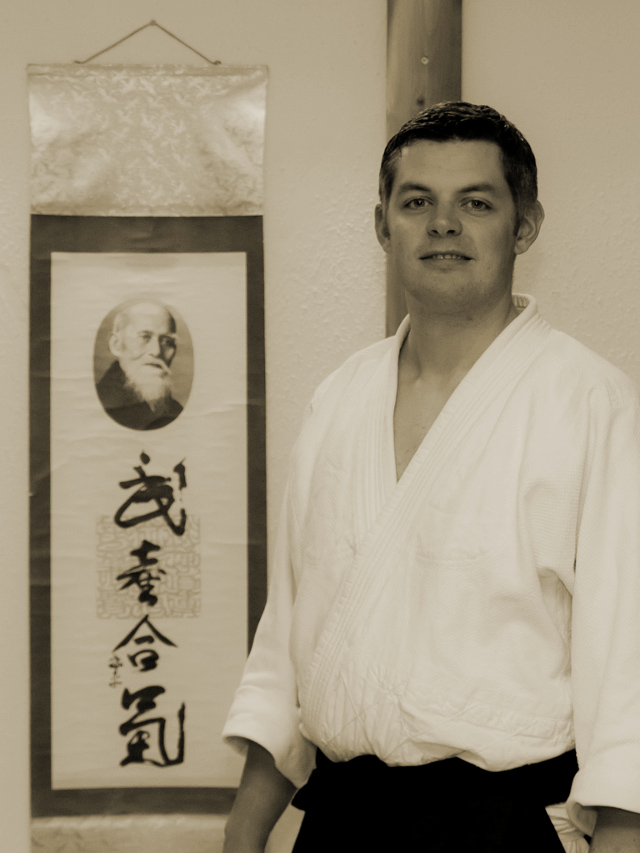 How I came to Aikido…

My First Impressions and The Way to Takemusu Aikido

I had my first experiences with Japanese martial arts very early. Through my sister, who was learning Ju-Jutsu at that time, I came to Judo at the age of eight. I also trained under Karl-Heinz Zehn for several years.

The first time I became aware of Aikido was during a Budo performance on television. I was impressed by the effortless way in which the attackers were overpowered. Somehow everything looked harmonious and well-rounded. As a result of this performance, I bought myself a book on the subject. The author of this book (AIKIDO-Teaching and Techniques of the Harmonious Path) was Rolf Brand, a student of André Nocquet. At that time, I knew nothing about the different styles and characteristics within this martial art.

In the years following, I became aware of an aikido group in a gym in Marktredwitz, but could not persuade myself to participate in the training. One day, my mother approached me with a newspaper article. An aikido teacher that I knew from the past, Christian Büttner, opened a traditional Japanese style martial arts dojo just fifty meters from my front door! While reading this article, I had the telephone in my hand and registered for a beginner’s course.

When I first entered Takemusu-Aikido Dojo a few weeks later, I was more than uncertain whether this kind of martial art was the right one for me. The enormous engraving on the front door that read “This is a traditional Aikido school-please take off your shoes” and the scent of two hundred incense sticks put me off. The other members of the beginners’ course were all older than me and their alternative way did not necessarily benefit me.

However, after a few tumbles and many Japanese terms, I was convinced that I could at least get through the beginners’ course. The initial motivation for the following years was definitely the second evening of the beginners’ course. After training, I approached the Sempai in charge to have some techniques explained to me more precisely. He took the time and trained an extra hour with me after all the other students had long gone home. After this private lesson, we sat down in the lobby and chatted over a beer about techniques, development, and the different styles of aikido until two o’clock at night.

After this evening, the Aikido bug had me firmly in its grip. Because my home was so close to the dojo (even if I could not participate in the advanced training yet), it was possible for me to watch it more often.

In the beginning Aikido seemed very structured, the constant Kihon-Training does not necessarily suggest that you can react to realistic attacks. Particularly because the self-defense factor is very important to a beginner. Through the many observations, conversations, and explanations of Sensei Christian, I quickly realized that Kihon is not the real Takemusu Aikido.

Therefore, I recommend to every newcomer, never stop with Aikido because of a misleading impression. Don’t give up simply because one is challenged or held in the beginner course.

My experience from more than one conflict situation has shown me that at Takemusu Aikido (at least in our Dojo), things are taught that may only prove to be effective after a more in-depth look. They do not emerge after taking five evenings of self-defense courses.

Five years have passed since I first joined this school. So far, I have never had the feeling of not wanting to go to training.Today, many of the people who train here have become good or best friends.

My Sensei Christian has always tried to encourage and motivate me. Due to his strong relationships and his open nature, it was possible for us to gain many new and interesting impressions and experiences on several international courses. We ultimately owe our great experiences during courses with martial arts experts such as Dr. Paolo N. Corallini Shihan, Ulf Evenas Shihan, Bill Witt Shihan, and Hiroshi Iosyama Shihan….to him! A heartfelt DOMO ARIGATO to my Sensei and friend Christian!

I would also like to thank my teacher, training partner, and friend: Bernd. Without you, I would never have reached this point! DOMO ARIGATO Sempai!

And a heartfelt thank you to my Sempai Hubert and all the other members in our Aiki Dojo!