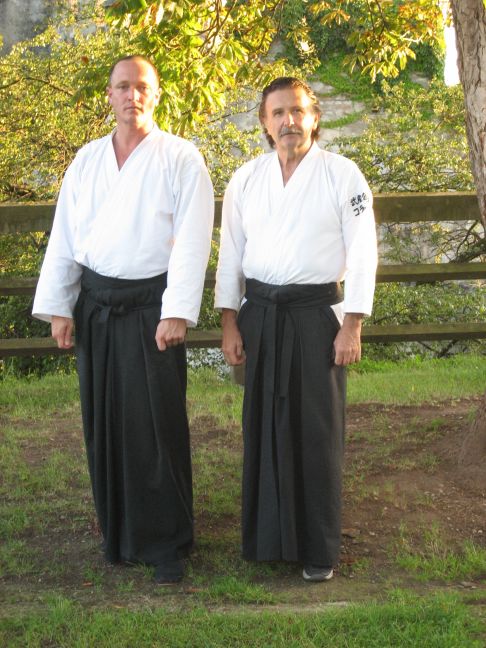 At the age of 18, he began to study Ju-Jutsu and was very quickly introduced to Aikido-the art that was about to influence his life and had just established its presence in Italy. In his early years, he studied under Motokage Kawamukai Sensei, who awarded him the SHODAN (first Dan) in 1997. In 1979 Corallini was appointed NIDAN (second Dan) by Kobayashi Sensei and established ties with French schools, where he met André Noquet Sensei, a direct student of Aikido founder O’Sensei Morihei Ueshiba. André Noquet was, at that time, president of the European Aikido Union.

In 1981, Paolo Corallini received the SANDAN (third Dan) from Noquet Sensei. In 1984 he received the YONDAN (fourth Dan). That same year, he became President and Technical Director of Aikido Union Italy within the European Aikido Union. During this year he also wrote his first book about Aikido and attended countless seminars with some of the best-known Japanese teachers such as Tamura, Tohei, Yamada, Saotome, Chiba ect.

In February 1985 Saito Sensei accepted the invitation of his student, Paolo Corallini, to hold a TAKEMUSU AIKIDO Aikido Seminar in Italy. This was the first time that Saito Sensei came to Central Europe. From then on, Saito Sensei visited Italy a total of 17 times to teach and Corallini went to Iwama more than 24 times as UCHI DESHI (homeschool student) to train with his teacher.

In 1985 Paolo Corallini founded TAKEMUSU AIKIDO Italy, an association of dan performers who trained faithfully under Saito Sensei. Since 1984, Corallini followed his teacher Saito Sensei, as an enthusiastic student, on countless seminars and contributed to the spreading of traditional Aikido, practiced by the founder, all over Europe.

In 1988 Saito Sensei awarded him the GODAN (fifth Dan) TAKEMUSU AIKIDO TAI JUTSU, the MOKUROKU, and the GODAN BUKI WAZA (weapon techniques), which gave him permission to teach and test the weapon system of Iwama. He was also appointed by Saito Sensei as representative for Northern and Southern Europe and Africa.

As a teacher, he travels to Germany, Scotland, Switzerland, Spain, Portugal, Austria, Croatia, Bulgaria, Denmark, Sweden and the Republic of South Africa every year.

After the death of his teacher, friend and mentor: Saito Sensei, Paolo Corallini (President and Technical Director of TAKEMUSU AIKIDO ASSOCIATION ITALY) contacted Moriteru Ueshiba, the DOSHU of AIKIKAI Tokyo (Japan), fulfilling the wish of his late teacher Saito Sensei to support AIKIKAI and the DOSHU and to obey the rules of AIKAI.

Paolo Corallini also announced that he would protect, preserve and pass on the legacy of his teacher Saito Sensei, both the complete teaching method as well as the entire pedagogy.

On April 15, 2003, the DOSHU Moriteru Ueshiba officially authorized Paolo Corallini Sensei to test his students under the rules of the AIKIKAI and to award DAN graduations (certificates).

In 1998, Corallini Sensei wrote the book “Aikido TAKEMUSU AIKIDO” for the National Association and “TAKEMUSU AIKIDO Aikido” in 1999, published by Sperling & Kupfer.

On January 9, 2011, Paolo Corallini was officially awarded the 7th DAN AIKIKAI by DOSHU Moriteru Ueshiba. This makes him the only 7th DAN Aikikai in Italy.